Fire season is never the best time to vacation in dry areas.  Still, sometimes you go when you can go.  When you do remember that the people who protect the woodlands are a unique breed. Think about them when you travel through the patches of blackened hillsides and say a prayer for their safety.  If you are lucky you will get to meet a few.

It’s a hell-hot, back-breaking, smoke-sucking profession – firefighting.  I’ve been around fires.  I’ve experienced bad fires.  For a couple of years, I was a firefighter on a small-town department… long enough to acquire scars still carried.  That was in my youth and those were mostly house fires.  Wildfires are a different colored devil.  They’re mean, like they are out to get you.

Smoke above Sonora, California billows from the A-Rock fire in Yosemite National Park in 1990.

Those are experiences I have as well, but always through a camera lens.  And the people who fight those fires… tough.  That’s the only word I can find… just, tough. My fire training helped to know when to stay, when to duck and when to run.  I also learned that when in a wildfire environment you should listen to the crew chief.

From an overlook on Highway 120 just outside of Yosemite National Park had I watched a nearby slope explode in an awe-inspiring display.  The fire caught at the base of the 45-degree grade and climbed 400 feet in four seconds.  No person, no animal, could have outrun the flames.  That was during the Stanislaus Complex Fire in 1987.  Sometime between 2013 and 2014 the same sloped burned again according to images on Google Earth.  It happens often.

A CDF crew watches the backfire they set to eliminate fuel from the main body of flames during a mid-1980s forest fire at Two Dog Pass near Tuolumne California.

The latter in my lessons mentioned above, “run” is often the wisest action of the three.  During a fire in California’s central Sierra Nevada, I did just that… Well, I didn’t run but I did drive out cautiously.  Following a lead to a location where structures were threatened, I came across a California Division of Forestry crew standing watch.  They were protecting a homesite with a few outbuildings that stood in a clearing that circled a small pond.  The first words from the crew chief weren’t encouraging. 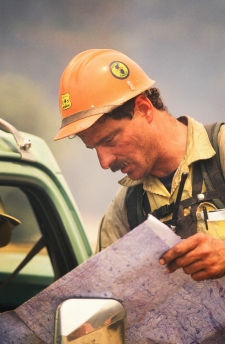 The Fire Boss and Crew Chief calls the shots, like this Mendocino County firefighter in 1987.

“We’re surrounded on three sides by fire,” he greeted me… smiling.  “If the wind doesn’t change you’ll be trapped with us.”

Interesting greeting it was.  “What will you do if it does?” I asked.

“We’ll drive the truck into the pond and get wet… Want to get wet?”

“If I need to,” I replied.  “But, only if I have too.”  I was well aware that my, now vintage, Nikon cameras would not favor moisture… nor flames.

He assured me he would inform me before it was too dangerous to leave.  I appreciated his candor.  Around the perimeter of the home, firefighters sat waiting for the flames to advance.  One, thirty-something-Vietnam-Vet casually puffed on a cigarette watching the fire burn toward our location.

“It could circle around us if the wind holds,” he said.  “We’ll be fine if that happens.”  Smoke scrolled upward from his lips as he talked.  “This is like when I was in ‘Nam waiting for Charlie to attack… It’s tense.”  The fire too was his enemy as it advanced slowly and deliberately toward us.

He returned to puffing the fire stick in his fingers.  A few feet away a pine tree began to crackle, burning from the lower branches the flames then climbed, eating their way toward the top.  He and others grabbed hoses and showered the tree, stopping the flames.  An ember had apparently dropped into the branches and slowly kindled. 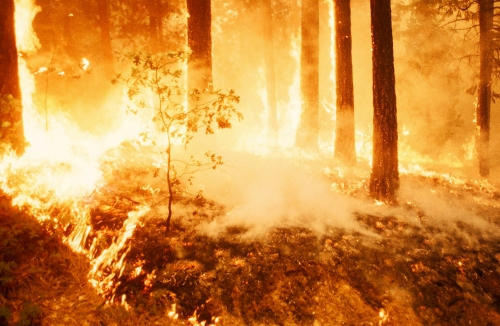 A fire in Calaveras County, California, (c.1990) burned through mountain neighborhoods. Here the fire scorches the underbrush.  In the distance, it is growing into a deadly tree-top, crown fire.

The ground below the tree sloped and rounded downward dropping toward the position where the main fire roared.  Some describe that roaring as being like the sound a freight train.  They are exact in their description.  A slow rumble quaked the ground underfoot.  Forest fires are raw power, like a gushing-spring-runoff-waterfall kind of power.  They fill the sky with acrid, burnt-pitch odors that tint light into a yellow-orange fog.  Behind the billows the sun peeks through, looking like a spotlighted, glowing disk.  It’s hard to breathe in low-hanging smoke.  The taste of turpentine builds on your tongue.  We can taste it.

A few minutes later the crew chief informed me that if leaving was my intention, this would be the time.  It was.  I did.  Wishing them luck I climbed into my Jeep and drove toward the exit gap that lay between to ridges.  As I passed through, the fire was a few feet to my left, slowly burning its way downhill.  If it jumped the road on which I drove it would gain speed and close the circle around the firefighters.

Heat from the flames radiated through the side window.  I pressed the gas and sped past, to safety.  It was months before I learned the situation with those I had just left.  There was no news of fallen firefighters, so I knew they were safe.  Eventually, I contacted them for a follow-up interview.  Apparently, shortly after my brush with the flames, the wind changed and stopped the inferno’s advance.  Someone was watching over the crew.  No water.  No getting wet.  But, still a close call.

A crew of Walapai hot shots saunters up the hill. I had witnessed them run at a constant speed over three ridges in steep, rocky terrain. They were amazing.

Hotshot crews are an amazing troop to watch.  It’s almost ballet, coordinated action, shovels scraping, Pulaski picks flying, combustible material being chopped, cut and pulled from the path of the fire.  Crews hike for miles with packs that are close to half their weight, fight the fire, then hike back to base.  Add a few chain saws to the load and their endurance is a thing of beauty –  dirt, sweat and all.

All of the crews that I have seen have been amazing workers with near super-human abilities.  The most impressive crews for crossing terrain that I have witnessed were the Native American hot shots.  A Walapai (Hualapai) crew from the Bureau of Indian Affairs astounded me for their running ability.  I dubbed the group, The Golden Dragon.  Spotting them two steep and rocky ridges away they appeared to be one chain of golden-orange as they snaked along the hillside.

They first came into sight as they topped a distant ridge and began running downhill… not walking… running, as a group, single file.  A few minutes later they topped a second ridge across a steep, rocky canyon from us… still trotting at the same speed then again dropped into the gap below me.  A short time later they jogged past my location on the trail.  None out of breath, none looking tired, all carrying their filled packs with tools and necessities.  I am still in awe.  A few days later I ran across them in a Groveland, California restaurant, shook a few hands and felt honored for having done so.

Tough, yep!  I guess, but how does one describe a superhero?

Stay tuned for the second part of this story.