James Oglethorpe and the American Revolution 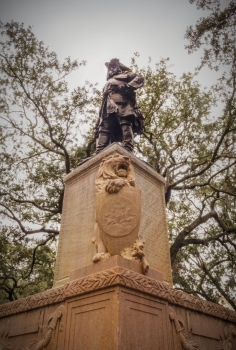 Interesting guy, James Oglethorpe, Englishman, MP and Major General in the British Army,  He was tough and courageous having once put down a squad of firearm-carrying mutineers armed only his sword.  He said of the Crown’s conduct at the time of the American Revolution, “[they have taken] …the occasion to animate us against one another. The English in Britain, against the Scots in Britain, against the English-born in America. To blind the people here, they unjustly call them Americans. The expense of this jealousy will weaken us much… the troops and Fleets sent over & the separating and making useless to us near three-millions of subjects in America completes the blow, which they hope will be a means to facilitate their execution of the division of Europe….” James Oglethorpe was the only founder of a British American Colony that lived to see it become an independent state and part of the United States of America.

He, like many other Brits, understood the American Revolution and the exasperation of the citizens there.  He too had been frustrated by the lack of understanding by the Crown, Parliament, and the people of Great Britain.  Most did not see the problems of the colonies and of the colonialist who had to deal with slow communication, no representation, and class disdain.  All of which Oglethorpe experienced during his decade in Georgia.  Though loyal to his country, he was one of the first in London to welcome John Adam, the first Ambassador from the new American nation. It was weeks before his death in June of 1785.  Adams later became the second President of the United States.