If you can’t get in the Booth, a kids’ table is fine with me

I love western art.  I love all types of art museums, but I especially love western art in western art museums. So naturally, I absolutely love the Booth Western Art Museum. So much so I became a member a while back. I’m from the West. I was transplanted to Georgia about twenty-five years ago having grown up in the rural western culture, horses, cattle, and riding to places where no one else was hanging out.

They have three guilds, the Booth Writer’s Guild, the Booth Photography Guild, and the Booth Artist Guild. I recently joined the latter two having found they are good places for me to see, learn, and update my painting and photo skills used in the last century for newspapers. The Booth is in Cartersville, Georgia. Yeh, Georgia, as in “The State of.”  It’s a few miles from The New York of the South — Atlanta.  I’m told it is one of the biggest western art museums in the USA.  Who’d a thunk?  In little ol’ Cartersville.

When you go you can often see traveling exhibits with works by the artist that I love. Hanging on the walls are paintings by Maynard Dixon, Frank Tenney Johnson, Frederic Remington, and Charles Russell from a century ago. They are among the great of the great. They captured moments in the Old West, or the perceived, Old West and have endured through time — them and a bunch more. 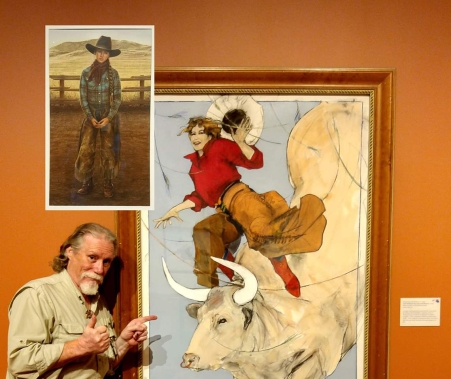 Carrie Ballantyne, top left, and Donna Howell Sickles, right, at the Booth a few years ago when I had darker hair.

Works at the Booth include the very-much-living female greats like Donna Howell Sickles, with her joyful, mythological, and optimistic paintings of western-female-cowgirl figures. Some of the subjects appear to defy gravity in mixed media while attracting animals in a Supergirl-cum-Snow-White-on-the-range kind of way.  I’ve seen Carrie Ballantyne’s work there as well.  Her painting and drawings include silky, lifelike, can’t-be-believed realist portraits of America’s cattle-culture people — the cowboys, and cowgirls that live in Ballantyne’s right-now, today, twenty-first-century, Wyoming world.

So, when a competition opened for a juried show at the Art Guild’s Fall/Holiday show I decided to enter. It’s at the Downtown Gallery, one of the Booth’s offshoots a couple of blocks from the main building. Two of my works were entered. One was chosen and I was happy. You see, having a painting associated with the Booth is an honor. Not as great an honor as being in a permanent exhibit in one of the main galleries, but still an honor. It’s akin to being able to sneak into the barbeque and being allowed to sit at the kid’s table. I was happy to get in.

My granddaughters, Morgan and Tara with me.  My painting is next to Tara on the right.  The third place, Red Rocks, by Elizabeth Carr can be seen on the right of the photo.

The thing is, there are some great artists in the Downtown show who, in my opinion, have the quality to join the greats in the grown-up seats. I’m sure some will one day. Might I be among them? Nope. Not likely. My approach to art is pure amateur. I do it because I love it and when I want or feel the need to slap paint.

Cecile Morgan’s Voices in the Wind has a painterly style with a Bierstadt-like glow.  It was my favorite in the show.

Some of these folks, like Cecile W. Morgan, are bringing out gallery-quality work regularly. She and her husband are both excellent artists. Cecile creates cameos of longhorn cattle, cowboys, cowgirls, and portraits in her dreamlike style. She placed second with a portrait of two cowgirls entitled, Cowgirl Memories, between Nikki Davidson’s Saint George Blues at first place, and a triptych, Red Rocks, by Elizabeth Carr who placed third. The People’s Choice Award went to Gary Worthan and his nautical painting, Waiting on the Word.  In all fifty-three artists were featured in the seventy-two works show.

So, can I say I came inches away from third place… since Red Rocks was next to my painting? Well, at least I was there and had a great time meeting folks.  Afterward, we walked to a restaurant to grab a bite. We sat in a booth.  Can I say I was in an art show and I was in the booth?  My grandkids told me, “No, Papa!” So, I grabbed one more photo of Tara… to prove I was in… THE BOOTH!

The last photo of the night, Tara at the table in black and white. So, hey, can I say I got into the booth… for supper.  Maybe next time.

If you get to Cartersville check out the Booth Western Art Museum. You can find it at 501 Museum Drive, Cartersville, GA or give them a call for more information, 770-387-1300.  It will be worth your trip.  Also, check out Booth’s Downtown Gallery.  It’s a few blocks away at 13 North Wall Street. You can give them a call at 770-387-4330.  Ask for Melissa.  She’s a nice lady with a big welcoming smile.

Next week we’ll talk about the Booth Western Art Museum and its show on Andy Warhol… yeh… that Andy Warhol.  Interesting, no?