James Oglethorpe and the American Revolution

Interesting guy, James Oglethorpe, Englishman, MP and Major General in the British Army,  He was tough and courageous having once put down a squad of firearm-carrying mutineers armed only his sword.  He said of the Crown’s conduct at the time of the American Revolution, “[they have taken] …the occasion to animate us against one another. The English in Britain, against the Scots in Britain, against the English-born in America. To blind the people here, they unjustly call them Americans. The expense of this jealousy will weaken us much… the troops and Fleets sent over & the separating and making useless to us near three-millions of subjects in America completes the blow, which they hope will be a means to facilitate their execution of the division of Europe….” James Oglethorpe was the only founder of a British American Colony that lived to see it become an independent state and part of the United States of America.

He, like many other Brits, understood the American Revolution and the exasperation of the citizens there.  He too had been frustrated by the lack of understanding by the Crown, Parliament, and the people of Great Britain.  Most did not see the problems of the colonies and of the colonialist who had to deal with slow communication, no representation, and class disdain.  All of which Oglethorpe experienced during his decade in Georgia.  Though loyal to his country, he was one of the first in London to welcome John Adam, the first Ambassador from the new American nation. It was weeks before his death in June of 1785.  Adams later became the second President of the United States.

The Ogeechee Canal was completed in 1830 and ran from the Ogeechee River to the Savannah River at the city of Savannah, Georgia.  Today it is a backwater that has been filled in in multiple locations.  This image is in Savannah along West Boundary Road where the canal runs under the old Central of Georgia Railroad bridges from the same era. 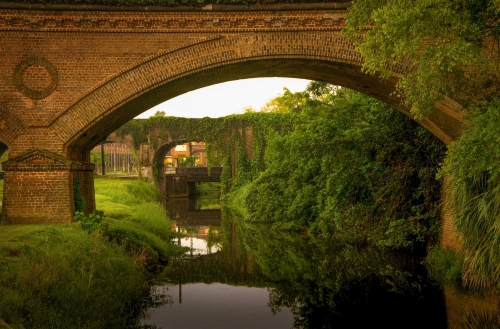 A young Panamanian mother from a jungle settlement carries her sick child to the El Piro clinic for examination by volunteer doctors from the United States.  Some Guaymi (Ngobe) people walked for three days to find medical care.

A young Panamanian mother from a jungle settlement carries her sick child to the El Piro clinic for examination by volunteer doctors from the United States.  Circa 1999. ©J D Byous, 2019.

Savannah, Georgia’s Bonaventure Cemetery, once was a weekend destination for picnics and weekend outings, had its own trolley station.  Today the site is also know as the

A carnation marks the grave of Johnny Mercer.

Garden of Good and Evil after a book was published on the cities odd characters of the 1970s.  Today it the necropolis is a tourist stop featuring the final resting places of the city’s notable people from history like the grave of songwriter and lyricist, Johnny Mercer.

A monument watches over graves among the oaks and Spanish moss.

Main Street in Cripple Creek, Colorado after a rain.

I had fun working on this small painting of an eagle kachina dancer.  It is part of my Pueblo series of southwestern gouache and acrylic renditions.  Not only is the culture of the Pueblo people fascinating, the geometric and ingenious construction of their buildings pique my historical-archaeological curiosity. 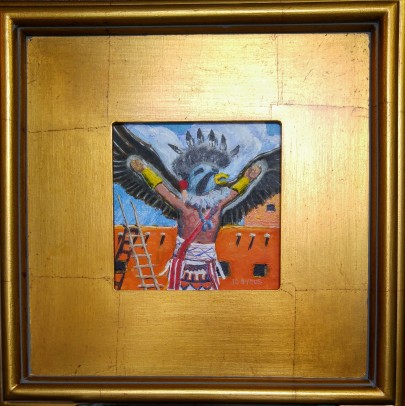 The painting was originally 5×7, but a mistake on a frame shipment turned out to only have a 5×5 frame.  It really didn’t bother me since the lower part of the painting was not finished and wasn’t going the way I had intended.  Therefore, a Skilsaw and a rasp changed it into a better picture. – JB