It was here, directly underfoot.  If you close your eyes you can feel it… at least some folks tell me they can – the history, the struggle, the conflict.  The starting of a new colony in the wild and woolly new world.  The start of a new nation in a time of enlightenment.  Then, later, the attempt to create a new confederacy and a new nation in the south.  Johnson Square in Savannah, Georgia was where, over the years, debate rang out and the results enacted.

The Marquis de Lafayette laid the cornerstone for the Greene monument in Johnson Square. Greene and his son are buried beneath it. Photo Morgie McCormick.

The Nathaniel Greene Monument is the centerpiece of Johnson square.  Its cornerstone, placed in 1825 by the Marquis de Lafayette, was finished in 1830 to honor Greene for his contribution to the Revolution.  Lafayette did lay the cornerstone, but the monument’s purpose changed over the half-decade before completion.  The original monument was to be for two Revolutionary War heroes, Greene and Casimir Pulaski.  Between the start date and the years-later finish, Pulaski would have his own monument a few blocks away in Monterey Square.  Greene had fought to reclaim Savannah from the British, as did Pulaski.  Pulaski died just after the battle having suffered a mortal wound in a daring charge on the Spring Hill Redoubt that stood on the east side of town.

When James Oglethorpe came to set up the new Georgia Colony in 1733 he, with the help of Colonel William Bull of South Carolina, drove the stakes to create this square first.  So, no bull, Bull street became the avenue that runs around it.  Today the common joke is that Bull starts at City Hall and flows through the city.  (Cue laugh track.)

The 20th-century sundial in Johnson Square.

Once known to residents as The Sundial Square, you can now see a replica… that sometimes has sunlight and sometimes does not… buildings and trees surrounding the park make it difficult to read.

The participants in the early Johnson Square events meant business – sometimes deadly business.  In the early days, for infringements of the rules, justice was often laid out at the end of a whip.  After two workers at Trustees’ Garden killed hogs for rooting out plants, they were flogged in a public display of correction.  The same fate came to a woman who continually gossiped.  She was flogged, then dragged behind an ox cart from the whipping post to Wright Square… and back.  Don’t know if she continued her nattering, but history’s silence suggests that she did not. 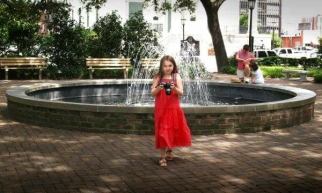 This 2008 image of photographer Morgie McCormick in front of the east fountain in Johnson Square. The mirroring fountain on the west was the site of the Indian pavilion.

The round fountain on the western side of the square occupies the spot of an important milestone in peace for the young colony.  In October 1757 Royal Governor Henry Ellis met with the leaders of the Upper and Lower Creeks who represented twenty-one Indian towns.  An open pavilion stood there where they all met to talk and enact peace.  After that time conflicts with the Native Americans were peaceful in Georgia’s territory, but conflicts were common in South Carolina and other regions.  A walk around the sprinkling nozzles will allow you to tread on historic ground.

Tarring and Feathering in Boston. Savannah had similar episodes.

Later, the seeds for the American Revolution in Georgia were planted, nurtured, and born here.  Tax collectors found harrowing rebuke here, tarred and feathered, they suffered a painful, scarring act that is now too torturous for civilized conduct.  Effigies of other officials including King George III burned and glowed in balls of fire, probably a few feet from the Liberty Pole that stood in the square.

The Declaration of Independence was read in this square in 1776 next to that Liberty Pole that marked the gathering spot for the Sons of Liberty.  It was also read aloud in Reynolds square and at Fort Halifax in Trustees’ Garden near the present-day Pirates House Restaurant.  The Sons of Liberty were a constant headache for Royal Governor James Wright… until he, at last, boarded a ship and sailed to England.  His loss of hundreds of acres of land must have been an equal blow to his ego.

This 1860 image from Harper’s Weekly shows the Gadsden flag on Greene’s monument in Savannah’s Johnson Square.

At the beginnings of the American Civil War citizens who supported secession from the Union held rallies around Greene’s monument to voice their disfavor with “Northern aggression.”  A Gadsden flag, the early symbol of American Revolutionist resolve, hanged from Greene’s granite obelisk.  Local tradition says that when Union General William T. Sherman captured the city in 1864 one of the first things that he searched for was that flag.  He found it and took it home with him.

When you visit Savannah, take in the sites, the architecture, the restaurants, and the nightlife.  But remember where you are walking.  You’re walking on history.